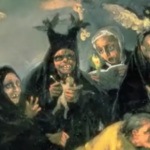 Halloween is a celebration with roots based in the Celtic pagan festival, Samhain. Ancient Celts rang in the new year on November 1 and believed  fairy-folk could emerge from their world could cause mischief, the night before, October 31st. The old Celtic belief was that if you dressed up as what you wanted to be in the new year, your wish would be granted.

As Christianity spread, the church put All Saints Day, otherwise known All Hallow’s Day, on November 1st, to ease the transition of the Celts accepting the new religion. The evening before, October 31, (All Hallows Eve), was, at the time, associated with the souls of the Christian dead returning to the mortal world. The word Halloween is a shortening of All Hallow’s Eve (Hallowe’en).

The merging of the the Christian and Celtic beliefs resulted in transformation of the old fairy beliefs into that of angels demons, spirits and monsters.  People would use hollowed-out, turnips and pumpkin’s carved with scary faces to frighten away spirits. Costumes became scary, rather than wishful for the same reasons.

The custom of trick-or-treating also comes from the Celts. The poor would go door-to-door offering prayers for the dead in exchange for treats. They would promise good luck to those who gave them good, and made threats to those who refused to give. 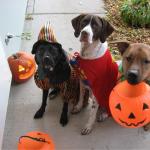 As people from the Celtic lands moved to the USA, the celebration grew and changed further, becoming very popular. In Europe, Halloween is not celebrated as widely as it is in the Americas, but has been growing due to expat migration, easier exchange of information via the internet and other mediums. In Basel and the rest of Switzerland, there are Halloween activities, but it’s not so common that you don’t get surprised looks if you get dressed up. If you take your children trick or treating, many houses will not have treats. 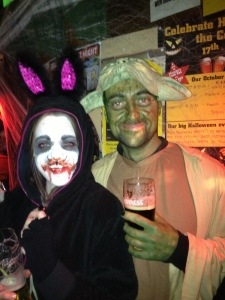 If you’re in the mood to get dressed up in Basel, and you want to find like minded people who are also into Halloween, you either need to go to someone’s private Halloween party or to a bar. There are lots of private parties, but generally you’ll need to be invited to one of these, or host one yourself, so I’ll focus on public Halloween fun.

There are several bars that have Halloween events every year.  For years when Halloween (Oct 31) falls on a Friday or a Saturday, this will generally be when the party is. If Oct 31st falls from Sunday-Thursday, the bars will usually have their Halloween events the weekend before. Most of the bar managers within an area know each other and discuss if the party will be on Friday or Saturday night, so that once you’re out and dressed up, you can go to a few different places on the same night. In 2019, most of the bars will have their parties on the Saturday night, October 26th.

In a lot of bars, if you dress up you get one free drink (sometimes your choice, sometimes a special Halloween cocktail), but they’ll usually let you know that when you come in.

Much of the Halloween fun for grown-ups goes on around the Barfusserplatz-theater area (Steinenvorstadt).

Mr. Pickwicks Pub has a Halloween party every year I’ve been here. Lots of costumes and English speakers. You can also go without a costume, but no free drink for those who aren’t dressed up and you’ll be in the minority if you are without a costume.

Paddy Reilly’s also has a Halloween party. It’s big and fun and you can dance downstairs (though there is not much room to move, its often so crowded!). The only problem is that there is often a line-up you have to wait in. But it’s usually worth it, if its a short line…

There are several other bars in the area that welcome those dressed up for Halloween, but those are the only two in town that I know have dedicated Halloween parties. 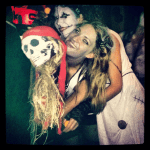 If you’re willing to go outside of town, Zic Zac has a great Halloween party, in Allschwil. Loads of people, great costumes, and good fun…Zic Zac usually has two halloween parties on the weekend closest to Halloween, one on the Friday and one on the Saturday.

For Halloween in Basel, there really are no rules. Anyone can dress up, young or old, no cliques, no limits. Your choice of costume is  your own, and only limited by your imagination, and how much time/money you’re willing to put into it.

These are my personal favorite for myself. If you need ideas, go online and surf around or watch some pre-computer generated special effects horror movies (try American Werewolf in London, from the early 1980’s).

There are some easy ways to make a really cool costume.  One of the simplest things to get is colored contact lenses. I don’t just mean the ones 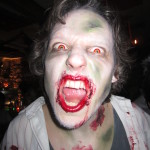 that turn your blue eyes green, but demon-red, zombie-white or all black… you don’t need to wear contacts normally or have corrective lenses to get a pair of contacts. You can get ones that change the color of your eyes, but not affect your vision at all.  Mr. Lens is a Swiss company, but their site is in English. Look at ‘Fun lenses on their menu, and choose if you want corrective or non-corrective. They have a wide selection of contacts that you can order, including relatively low cost one time use lenses.

For costumes, you can shop around at Manor or Pfauen, or some of the other big department stores in town. If you’d rather order online, many of the vendors on amazon.co.uk or amazon.de deliver to Switzerland. Or just dig up some old ripped up clothes and splash on some fake blood.

Put on a little face-paint, get some fake teeth, muss up your hair, and voilà, you’re a zombie, vampire or other assorted monster ready to take on the town!

These are my personal favorite on pretty girls. The easiest is to combine some sort of lingerie, or a sexy outfit, with matching animal ears and a tail. Draw on some cute whiskers and an animal nose and you’re done! Of course you’re not limited to sexy beasts…sexy anything goes over very well! Some ideas: nurses, cheerleaders, fairy-tale characters, cartoon characters, movie characters, etc. Basically, take almost anything and put ‘sexy’ in front of it and you’re onto something.

Not too difficult. Take any scary costume, and add the word sexy in front of it. For example, sexy zombie cheerleader or sexy evil alice from wonderland. You get the point!! 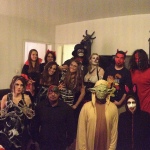 It seems that every other film that comes out these days is based on a science fiction book or movie, an old comic book or is remade from a video game or cartoon. Superhero outfits are especially easy to find, but use your memories and your imagination to take things a bit further. How about you and a few friends go as the Scooby-doo gang?

Like Star wars? How about a Jedi, Sith or good old Darth Vader costume? Maybe your more of a Star Trek fan…I’m sure you’d rock a Captain Kirk or a pretty ensign outfit. Interested in something else? You’ll find a costume, I’m sure of it. If not, you can make one!!

If you’re interested in carving a good Halloween pumpkin, you can get some smaller pumpkins at your local coop or migros or at the farmers markets in town. If you’re looking for a lot of selection and some really nice pumpkins, go to the pumpkin farm in Bottmingen. It’s easy to drive there, or you can take the number 47 tram stop, get of at Fiechthag and follow the signs. There is also an awesome corn field labyrinth. Good fun if you want to take the kids! But remember, be careful carving your pumpkins if you want to make a jack o’ lantern, and if you let your kids do it, be sure to supervise!

Have a great Halloween in Basel!